corruption of the young

Well I think she really likes me so there is no accounting for taste, but it works out for me. she lives on her own, a nice little apartment. some of her Ex's stuff is still there because he is in a halfway house in florida for alcoholism. so I am a step up. after i kissed her for the first time she said she was wondering when I was going to do that. I would have done it sooner but we were watching Deliverance and that was not a "mood" movie so to speak.... I am seeing her again tonight. 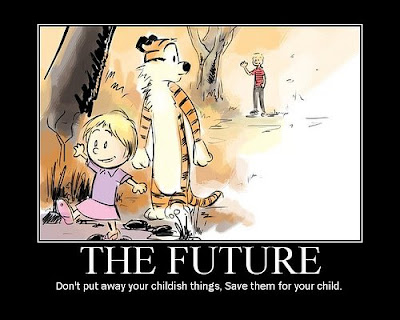 Sandman wrote:So I just started dating this new girl. Her name is Jen, we have gone out to the bar a couple of times and last night I went to her place for dinner and a movie. it was not untill the second movie was over that I got up the nerve to kiss her. that went on for awhile... she is really cute and a good cook so I am gonna try and hang on to this one

*pinches Sandy's cheeks* You're so cute.

Your awesomeness is akin to bottling a hurricane. It cannot be done - Mr. Wallstreet
Top

Nice! But the million dollar question is: does she like comics?

She is not against comics and she refered to the X-men movie about "those guys" but I think I can bring her around :-)

well I do not know what is going on with her anymore. she told me today nothing I did not know but still did not want to hear. she just got out of a 3 year relationship and is not ready for another relationship right now. the last time this situation happened with Tara....well she is now engaged.

Women are fickle things. Don't worry about it man, one will come along.

Ok I am going to be full time at the bakery now. Not sure when it starts though but I was officially asked to go full time and I signed the paper work for it. We have one woman there that no one likes ESPESSALY the manager, he is getting rid of her on Monday. so far I am the only one who knows about that, so I will be taking her place. When I went upstairs to fill out the paper work I was basically bum rushed by 2 other women from corpreate asking if I was Mike and if I would be interested in being the "official trainer" for the bakery. So alot of things happened in a short amount of time. It is not what I want for my life right now I want to be teaching and I will actually miss the students at the school I sub at, but it makes the most sence right now for me. As it is Most days I start my day at 6am and do not get home till 11pm working both jobs. neither of which has health benifits. if I go full time I would get more money, and more free time on my hands.

Dude, this might not be what you want or where your heart lies, but at the moment it does make more sense. Good luck with finding that really suits you, though.
Top

It's not what you want to do but bide your time until the economy gets back on its feet and state & local agencies start hiring again then you can go back into teaching. The situation you're in sucks right now but don't let it get you down for the count. Just keep moving forward.

And hey, you will have more cash and more free time so there is that.

If you ever need anything were here for you.
Top

So forthe last few weeks I have been training this new girl at work and she is unbeleavably beautiful! SO amazing! the down side is she is only 18 and just graduated from a school that I subbed at last year. we joke around and flirt and stuff, but nothing serious(damnit) today she told me that she would not date anyone over 20. (No luck for me but I am working on it!) I also told her that she had been turnin alot of heads with the grocery guys, she said yeah and that she told the one girl we work with to tell them she was a lesbian! then she confided in me that it was only half true! I have suce a hard on for this chick it is riddiculas!

Well the new girl and I flirt alot, I know it is not going to go anywhere but it is still fun. though today she came up behind me and when I looked at her she giggled and said sorry I was gonna pinch your butt I was like why didn't you? so she did. then I informed her that fair was fair and I would be taking the same liberties. but mine would be more of a grab and hold. and it was for a good minute or so! i had to readjust my pants after that though

Return to “The Board About You!”